Pets and their owners are in for another efficient equipment that will help them in their training with PetSafe In-Ground Fence Receiver Collars for Cats and Dogs, Waterproof, Tone and Static Correction. With its advanced technology and flexible features, disciplining dogs and cats will be an easier and more effective task. 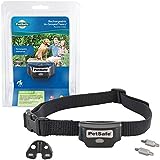 As for its charging matters, there are three highlights that make it a good find for pet owners.First, is that it has a long battery life despite its short charging time. To reach its optimum battery capacity, users just have to charge it for a good 2-3 hours. After that charging time, users can already utilize the battery for approximately 2 months, depending on use. Second, battery highlight is that it has two plug receiver collar chargers that allow the users to charge two collars at the same time.

Last but not the least, is the Low Battery Indicator. With the help of this feature, users will immediately receive notifications that the battery had hit a critically low level. This helps in letting the author know when it is already time to recharge the batteries and make pet training more efficient.

Aside from these battery features, users can also utilize the receiver-collars’ waterproof feature. As for its correction features, the users can operate on four levels and a tone-only correction. The fit for the dog or the cat is not a problem since it fits the majority of pets. The sizes that are covered by this receiver-collar are particularly those weighing 5 pounds and up and with neck sizes measuring 6-26 inches.

This product also comes in different variants such as the cat collar, elite little dog collar, rechargeable collar, stubborn dog collar and ultralight collar. These variants set each apart from the other through the style, design, and collar. Each of these variants differs in prices, as indicated on the official website.

The PetSafe In-Ground Fence Receiver Collars for Cats and Dogs is a highly-recommendable product for those who own many pets. Not only is this product for pet owners with many pets but also for those who want the best for their pet’s security and discipline.

With the multiple and varied correction levels and methods and battery advantages, users will find convenience using this product. The disadvantage of these products are at the hands of the users—whether they’d allow it to happen or not. This means that these instances are preventable at certain extents, making it less of a problem to face.

Also, with the advantages offered by this collar, users are sure to get the most of what they have paid for.Pets are also at an advantage using this product since their safety and comfort is still a priority along with the training and discipline.

This site uses Akismet to reduce spam. Learn how your comment data is processed.

As an Amazon Associate, this site earns from qualifying purchases. We may also earn small commissions on purchases from other retail websites.